Zhenhua Vacuum adheres to the concept of green coating technology. Over the years, it has focused on the development and manufacture of various vacuum coating machines. In recent years, it has also made great progress in functional material film and composite film. Coating equipment is widely used in aerospace, electronics, optics, machinery, construction, light industry, metallurgy, materials and other fields. It can be used to prepare films with wear-resistant, corrosion-resistant, decorative, conductive, insulating, photoconductive, magnetic, lubricating, superconducting and other characteristics. With the development and manufacture of Zhenhua Vacuum in the vacuum coating machine for many years, Zhenhua has made many breakthroughs in the vacuum coating technology, such as multi arc ion plating and magnetron sputtering composite technology, large rectangular long arc target and sputtering target, unbalanced magnetron sputtering target, twin target technology, strip fiber dimension fabric winding coating technology, etc. 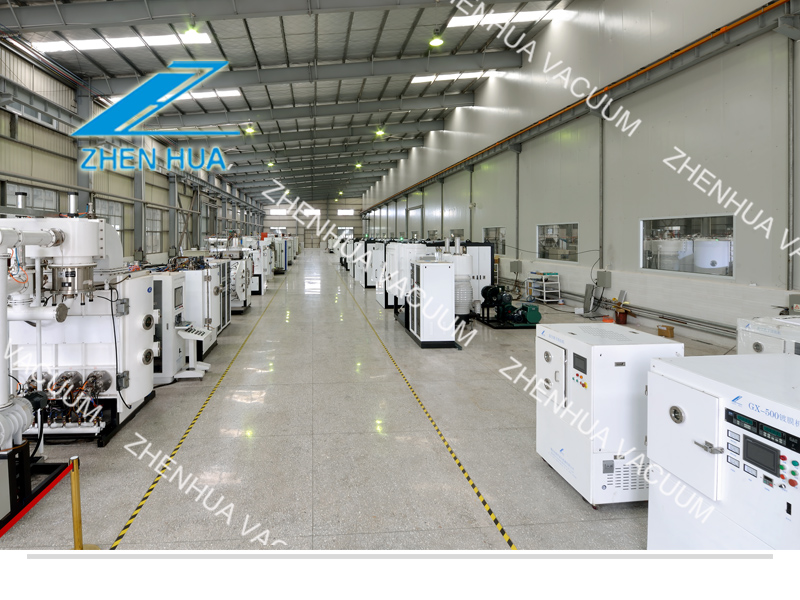 On-line high-temperature pyrolysis deposition method "Low-E" glass has products from multiple companies in the United States. Such as PPG's Surgate200, Ford's Sunglas H. R"P". These products are completed during the float glass cooling process. Liquid metal or metal powder is directly sprayed onto the surface of the hot glass. As the glass cools, the metal film becomes a part of the glass. The film is hard and durable. The "Low-E" glass produced by this method has many advantages: it can be hot-bent and tempered, does not need to be used in a hollow state, and can be stored for a long time. Its disadvantage is its poor thermal performance. Unless the film is very thick, the "u" value is only half of the "Low-E" coated glass by sputtering. If you want to improve the thermal performance by increasing the film thickness, the transparency is very poor.

Manufacturers and products that can produce "Low-E" glass by the sputtering method include "LnplusNetetralR" of Interpec in North America, Sungatel00 of PPG, Sunglars of Ford, etc. Unlike the high-temperature pyrolysis deposition method, the sputtering method is offline. And there are horizontal and vertical points according to the different transmission positions of the glass.

In the vertical production process, the glass is placed vertically on a shelf and sent into a large vacuum chamber. The pressure in the vacuum chamber will decrease accordingly. The vertically mounted cathode target sputters metal atoms and deposits them on the glass substrate to form a film. In order to form a uniform film, the cathode target moves back and forth near the glass surface. In order to obtain a multilayer film. Multiple cathodes must be used, and each cathode moves back and forth on the glass surface to form a certain film thickness.

The horizontal method is largely similar to the vertical method. The main difference is the placement of the glass. The glass is transported by horizontally arranged wheels. After passing through the cathode, the glass passes through a series of pinned valves, and the vacuum degree also changes. When the glass reaches the main sputtering chamber, the coating pressure is reached, the metal cathode target is fixed, and the glass moves. As the glass passes through the cathode, a film layer is formed.

Because there are a variety of metal target materials and a variety of metal target material combinations, therefore, the sputtering method to produce "Low-E" glass can have a variety of configurations. In terms of color and purity, sputter plating is also superior to thermal spraying, and because of the off-line method, it is also more flexible in the development of new products. The main advantage is that the "Low-E" insulating glass produced by sputtering has a "u" value better than that of pyrolysis products, but its disadvantage is that the silver oxide film is very fragile, so it is impossible Use like ordinary glass. It must be made into hollow glass, and it is not suitable for long-distance transportation before it is made into hollow products.

For residential insulating glass, I always hope that the lighting performance is good, while blocking all ultraviolet rays and some infrared rays. Fortunately, "Low-E" glass has this function:

Low-E insulating glass has a transmittance of more than 60% to the solar radiation of 0.3-2.5um. During the day, most of the radiant energy from outdoor can be transmitted, but at night and rainy weather, the thermal radiation from indoor objects is more than 50%. When it is reflected back into the room, only less than 15% of the heat radiation is absorbed by it and then lost through re-radiation and convection exchange, so it can effectively prevent the indoor heat from leaking to the outside. This characteristic of Low-E glass makes it control the effect of unidirectional flow of thermal energy into the room.

The thermal insulation performance of the window glass is generally expressed by the "u" value, and the "u" value is directly related to the emissivity of the glass.

"u" value is defined as: under ASHRAE standard conditions, due to the heat conduction of the glass and the temperature difference between the indoor and outdoor, the resulting heat transfer from air to air. Its imperial units are: British thermal units per hour per square foot per degree Fahrenheit, metric units are: watts per square meter per degree Celsius, the lower the "u" value, the lower the heat transfer through the glass, and the insulation performance of the window glass The better. Emissivity is the ratio of the heat radiated per unit area of an object to the heat radiated per unit area of the black body at the same temperature and under the same conditions. Emissivity is defined as the ability of an object to absorb or reflect heat. In theory, a completely black body has 100% absorption at all wavelengths. That is, the reflectivity is zero. Therefore, the blackbody emissivity is 1.0.