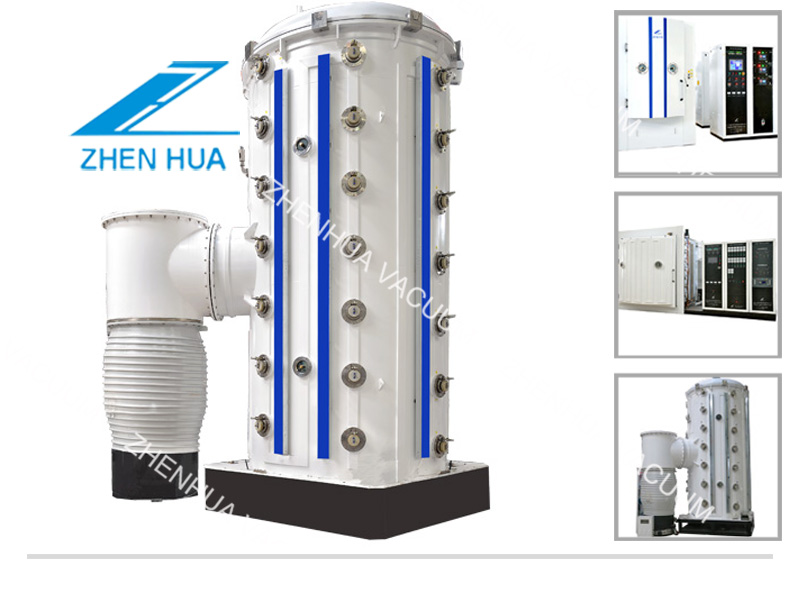 Vacuum ion coating equipment originated from the theory proposed by D.M.Mattox in the 1960s, and corresponding experiments began at that time; until 1971, Mr.Chamber published electron beam ion coating technology; and reactive evaporation (ARE) technology report by Mr. Bunshah in 1972 and pointed out that super-hard film types such as TiC and TiN were produced at the same time; also in 1972, Mr Smith and Mr Moley adopted hollow cathode technology in the coating process. In the 1980s, china's ion plating finally reached the level of industrial application, and coating processes such as vacuum multi-arc ion plating and arc discharge ion plating appeared one after another.

The entire working process of vacuum ion plating is: First, pumping the vacuum chamber into vacuum. When the vacuum environment pressure is above 4X10⁻³Pa, the high-voltage power supply needs to be connected to construct a low-pressure discharge gas between the substrate and the evaporator. Plasma low temperature area. A negative high voltage of 5000V DC is used to connect the substrate electrode to form a glow discharge of the cathode. Inert gas ions are generated near the negative glow zone. They enter the dark zone of the cathode and are accelerated by the electric field and bombard the surface of the substrate. This is a cleaning process, and then enter the coating process. Through the bombardment heating, some gasification In the plating material, atoms enter the plasma zone, collide with electrons and inert gas ions, and a small part of them are ionized. The high energy of these ionized ions will bombard the surface of the film, which will improve the quality of the film.ioncoatingequipment/ion sputtering coating machine/ioncoatingequipment/ion sputtering coating machine

Ion coating equipment combines the three technologies of vacuum evaporation, plasma technology and gas glow discharge, which not only significantly improves the quality of the film, but also expands the application range of the film. The advantages of this process are strong diffraction, good film adhesion, and various coating materials. The principle of ion plating was first proposed by D.M.Mattox. There are many types of ion plating, and the more common one is evaporation heating. There are various heating methods such as resistance heating, electron beam heating, plasma electron beam heating, and high frequency induction heating. Of ion plating device.