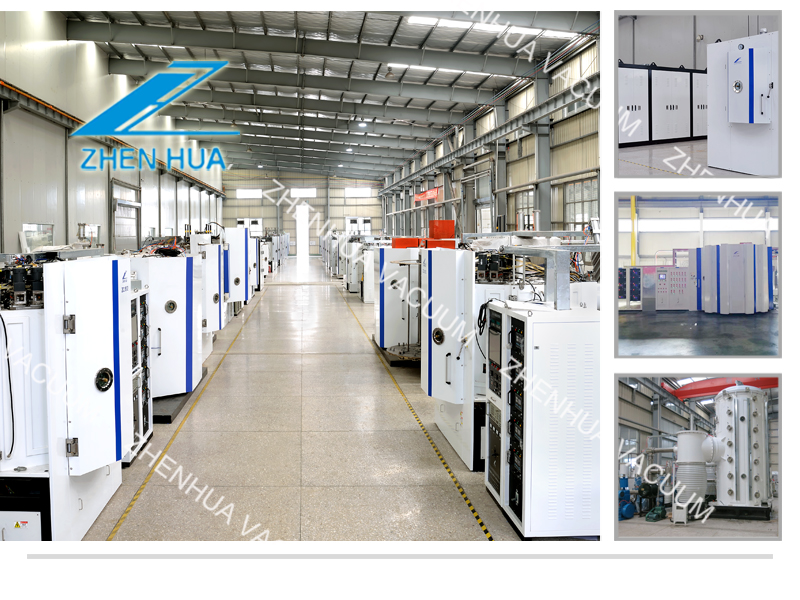 Compared with the traditional plating process, the jewelry vacuum plating process is more expensive, but the performance of adhesion, corrosion and wear resistance has been greatly improved, If you want to plating imitation gold, for stainless steel substrates we recommended to choose vacuum coating , For plastic material we suggest using evaporation coating machine.

PVD means "physical vapor deposition", which refers to a thin film preparation technology that uses physical methods to deposit materials on the workpiece to be plated under vacuum conditions.

The specific principle of PVD coating (ion coating) technology is to use low-voltage, high-current arc discharge technology under vacuum conditions, use gas discharge to evaporate the target material and ionize the vaporized substance and gas, and use electric field acceleration Function to deposit the evaporated substance and its reaction products on the workpiece.

The type of color of the film that can be plated by PVD coating—The color of the film that can be made by PVD coating at present is dark golden yellow, light golden yellow, brown, bronze, gray, black, gray black, seven colors, etc. By controlling the relevant parameters in the coating process, the plated color can be controlled; after the coating is finished, the color can be measured with related instruments to quantify the color to determine whether the plated color meets the requirements.

The similarities and differences between PVD coating and traditional chemical electroplating (water electroplating) PVD coating and traditional electroless electroplating are similar in that both belong to the category of surface treatment, and one material is covered by another in a certain way surface. The difference between the two is: PVD coating has greater bonding force with the surface of the workpiece, the hardness of the coating is higher, wear resistance and corrosion resistance are better, and the performance of the coating is more stable; PVD coating will not produce Toxic or polluting substances.

PVD coating technology is currently the main application industry, the application of PVD coating technology is mainly divided into two categories: decorative coating and tool coating. The purpose of decorative plating is mainly to improve the appearance and decoration performance and color of the workpiece while making the workpiece more wear-resistant and corrosion-resistant to extend its service life; this aspect is mainly used in various fields of the hardware industry, such as door and window hardware, locks, bathroom hardware and other industries. The purpose of tool plating is to improve the surface hardness and wear resistance of the workpiece, reduce the friction coefficient of the surface, and increase the service life of the workpiece; this aspect is mainly used in various cutting tools, turning tools (such as turning tools, planers, milling cutters) , Drill bits, etc.), various hardware tools (such as screwdrivers, pliers, etc.), various molds and other products. :

A. The film layer and the surface of the workpiece have strong bonding force, which is more durable and wear-resistant

B. The diffraction performance of ions is good, and it can coat workpieces with complex shapes 0v+R0S4

E. The film has stable performance and high safety (obtained FDA certification and can be implanted in the human body).

The development of PVD technology

PVD technology appeared in the late 1970s, and the prepared film has the advantages of high hardness, low friction coefficient, good wear resistance and chemical stability. The initial successful application in the field of high-speed steel cutting tools attracted great attention from the manufacturing industries around the world. While developing high-performance and high-reliability coating equipment, they also carried out more in-depth coating in cemented carbide and ceramic cutting tools. Layer application research. Compared with the CVD process, the PVD process has a low processing temperature and has no effect on the bending strength of the tool material when it is below 600 ℃; the internal stress state of the film is compressive stress, which is more suitable for the coating of carbide precision and complex tools; PVD The process has no adverse effects on the environment, and is in line with the development direction of modern green manufacturing. At present, PVD coating technology has been widely used in the coating treatment of cemented carbide end mills, drills, step drills, oil hole drills, reamers, taps, indexable milling inserts, special-shaped tools, welding tools, etc.

PVD technology not only improves the bonding strength between the film and the tool matrix material, but the coating composition has also evolved from the first generation of TiN to TiC, TiCN, ZrN, CrN, MoS2, TiAlN, TiAlCN, TiN-AlN, cnx, DLC and ta- C and other multiple composite coatings.