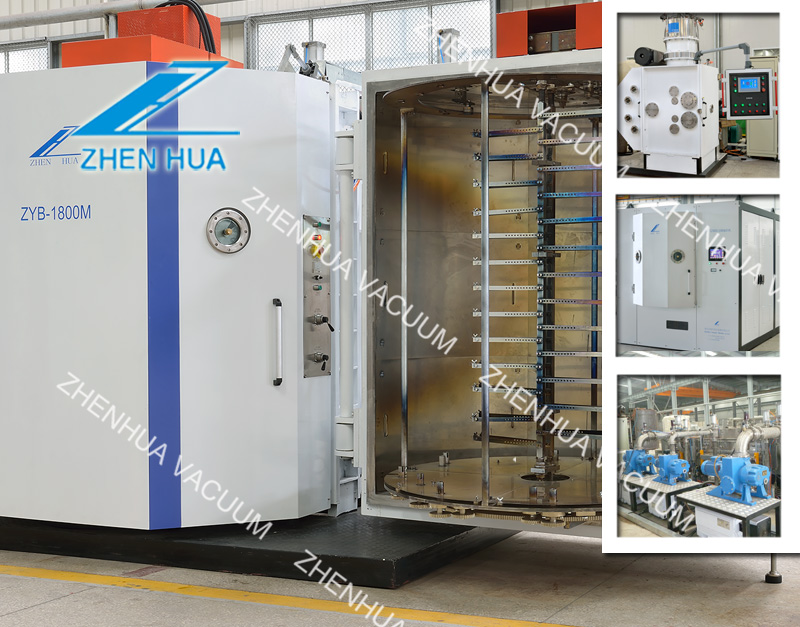 Generally, coating is carried out in a vacuum coater with a vacuum of 1 to 5 x 10-4 Torr (1 Torr = 1 mmHg high pressure, 760 Torr atmospheric pressure). Its film thickness is about 0.1 to 0.2 microns. If the coating is below a certain thickness (ie too thin), the top oil will erode the bottom oil, causing chemical changes (such as surface fogging, etc.). The coating is too thick and whitening. The coating is formed by first heating the coating source (tungsten wire) with a strong current, and then melting the aluminum sheet or aluminum wire hanging on the tungsten wire. As a result, the aluminum material evaporates, disperses in all directions and adheres to the plated parts. Molten aluminum is aluminum atoms, exists in amorphous or liquid state, adheres to the plated parts, and becomes an aluminum film after cooling and crystallization. Therefore, when the tungsten wire is set to a fixed number, from the degree of vacuum to the flight direction of the evaporated aluminum, the temperature of the tungsten wire, the distance between the tungsten wire and the workpiece to be plated, etc. ; Depending on the coating conditions, the properties of the coating also change in addition to changing. As mentioned above, coating is carried out at about 10-4 Torr. If the vacuum is too low, the evaporated aluminum is heated by the residual gas or the gas produced when it contacts the tungsten wire, and then cooled, forming aluminum particles (aggregates of very small aluminum particles) that adhere to the part being plated. At this point, the resulting coating may lose its luster because the fine aluminum particles still contain residual gas, which also greatly reduces the adhesion of the coating to the base oil. If the vacuum degree is high and the temperature of the tungsten wire is high, the kinetic energy of evaporating aluminum will also increase, and pure aluminum (no residual gas) will adhere to the surface of the coated part, and the density is high, so the coating performance will be improved (including adhesion, etc.).

Coating atomization: Different coatings are formed according to different coating conditions. As mentioned above, the most common problem in field work is fogging. This phenomenon is caused by the difference in the expansion coefficients of organic polymers (coating films) and metals (aluminum films). While it may be due to the nature of the coating, in general fogging should not occur if the coating is applied correctly. However, the material of the coated parts is changing with each passing day (including recycled materials), which may also cause fogging.

The reasons for fogging are as follows:

Insufficient drying of base oil (corrosion of surface oil)

The effect of plasticizers

When the coating is too thin

When the humidity is too high

The water content of the diluent is too high

According to the above conclusions, to obtain a good coating effect, the application conditions of the coating should be observed correctly, and the residual stress (deformation and internal stress) of the rough molded plastic should be avoided. Vacuum plating of molded synthetic resins (ABS, PS, PP, PC, etc.) in various forms can cause varying degrees of deformation, which adversely affects adhesion and leads to cracking. Such cracks can only be caused by thermoplastics, possibly due to internal stress during molding. Although the same material depends on the molding conditions and molding method, it also occurs, mainly in the protruding part. This phenomenon can be mediated by the use of weak solvents. Although some problems can be solved, reducing the heat distortion temperature of the material, and maintaining that temperature to relieve stress, can definitely solve the cracking phenomenon. Plastic products require a release agent during the injection molding process, resulting in non-stick coating, lack of gloss, poor adhesion, and fogging. Bad influence on painting.

As we all know, plastic is very insulating, so the static electricity in the plastic will lose its luster (gloss) during the electroplating process. This discoloration of the surface of the coating is not comprehensive, but only partially occurs. This is because static electricity attracts dust in the air that cannot be blown away by compressed air. When electroplating, no gloss loss will be found, but some will appear obviously when the surface paint is applied. This is electroplating on the dust attached to the primer, which will only be noticeable if it is partially eroded by the topcoat.

Conclusion This phenomenon is most likely to occur when the formed workpiece is stored for a long time. So this artifact cannot be recommended. If the base oil dries and electroplating immediately, there will be less trouble.

Erosion of the top oil to the bottom oil: There are many tiny pinholes in the electroplating film, and the solvent in the top oil penetrates from the pinholes into the bottom oil of the lower layer, eroding the bottom oil. Therefore, although the base oil is used correctly, if it is not properly matched with the face oil, there will definitely be problems. Oil erosion is characterized by tiny protrusions in the center of the spots.

The main causes of surface oil erosion are:

(2) Caused by the release agent.

(4) The base oil and surface oil are not well matched.

The above states some of the problems that can be solved by themselves. The reality, however, is that coating problems are caused by multiple causes. Problem solving, albeit with some field experience. The white spot phenomenon of composite aluminum coating can be described as: composite products have obvious white spots, which can be randomly distributed and vary in size. There are two cases, one is: get off the plane from time to time, but basically disappear when mature; the other is: get off the plane and do not disappear after aging. The latter is a matter of aesthetics. This speckle is most likely to appear on prints with an all-white or light-colored background. In fact, it should be said that as long as such a white spot appears, it is generally a full version (except for equipment reasons). It's just that the poor covering power of the light-colored background on a white background is easy to see. There are many reasons for the phenomenon of vitiligo, mainly including three aspects of pigments and fillers. 1. The particle size of the ink is too large or the particle size distribution is too wide, which generally has a greater impact on the particle size of the white ink. Binder ethyl ester is a good solvent for ink, and the wetting effect of ink particles with different particle sizes is different. After drying in the oven, the color change will be different, as if there will be a "white spot". In this case, it is obvious when you get off the plane, the white spot phenomenon will be reduced, and it may disappear after curing.

2. The surface tension of the adhesive is high, and the wetting and spreading effect of the aluminized film is poor. This is one of the main reasons for the "white spot phenomenon" of the current aluminum coating. The coating effect of the adhesive is not good. After the printing layer is covered, the color of different parts will change, resulting in the same effect as before, sometimes with large spots.

3. Equipment process reasons. On the one hand, the reason for this is that the workers do not realize the particularity of the aluminized film composite material, which has its own unique characteristics; on the other hand, the problems of equipment drying, coating, and the system itself cannot guarantee the adhesive. sufficient uniform coating or sufficient volatilization of ethyl ester. There are other reasons, such as the anilox of the full-bottom printing anilox roller is too shallow, which reduces the hiding power of the ink.

2. Use a special adhesive for aluminum coating. The surface tension of the special glue for aluminum-coated composite materials is low, and the spreading effect on the surface of the aluminum coating is obviously better than that of the general glue. It is very easy to control the leveling of the glue with aluminized glue, and it has an ideal coating state. From the coating state of a single glue, the use of aluminized glue can eliminate the possibility of white spots.

3. There is a certain matching relationship between the viscosity of the glue and the number of rolls. If it exceeds the matching range too much, it will destroy the coating state of the glue, resulting in more serious effects such as "white spots". However, it appears that the "white spots" that appear on the aluminized film are the main cause of concern.

4. Use the method of coating aluminum film. The usual coating process is to coat the printed film (ink side). A special coating method is adopted here to avoid the problem of uneven penetration of ethyl ester into the ink layer. At the same time, the coated adhesive can fully and evenly cover the surface of the aluminized layer, which can eliminate white spots well. However, this process has its significant limitations. First of all, it is limited to the compounding of VMPET, and other aluminized films will be stretched and deformed under the action of tension due to the influence of the heat in the oven. Second, some peel strength will be sacrificed.

5. Flexible packaging enterprises must adhere to the regular cleaning system of the coating roller and master the correct cleaning method of the coating roller. There are two things to keep in mind when making print films with an all-white background or a light-colored background. First, thoroughly clean the doctor blade, applicator roll and flat roll before production.

6. The adhesive should be thoroughly dried. Due to the good barrier properties of aluminum plating, if the bonding in the composite film is not completely dried, after the composite film enters the curing chamber, a large amount of residual solvent needs to be quickly released, and bubbles will inevitably form under the barrier of the aluminized film. There will be no white spots even when getting off the plane, and there will be white spots after curing.