Our customer Mr Joseph Met is a mobile phone component manufacturer from USA.

He has a mobile phone cover processing factory in China now. His business is mainly come from a variety of well-known mobile phone brands factories.In order to increase the production capacity of coating equipment, Mr Joseph Met began to look for professional vacuum coating equipment manufacturers. When he searched our official website, he learned that Guangdong Zhenhua Technology Co., Ltd. is a professional vacuum coating equipment manufacturer and have R&D, sales,production and service departments,can offer a very good service to customers. He is very interested in our factory.

In Aug 2019, Mr Joseph Met came to visit our company. After communicated with Zhenhua's process engineers, Mr Joseph Met's requirements is confirmed.We recommended our GX2700 PVD optical vacuum coating machine to him which is newest and have stable running performance, the most important is the machine have biggest capacity. The inner chamber size of the GX2700 is: Ф2700*1950mm, equipped with one set imported electron gun, USA brand film thickness gauge and ion source, can make AR/AF film on glass, PET film or plastic composite board. And also include color film, gradient film and non-conductive bright silver film layer can be coated on those surface. As the market's pursuit of the appearance of mobile phones continues to escalate, the gradient color is increasingly sought after by the market. Mr Joseph Met is very excited about this machine.

After discussion,sample making and visits, Mr Joseph Met gave a very high affirmation to our company strength. And he was very satisfied with our GX2700 optical vacuum coating machine. Finally, he decided to purchase 10 sets machines for the new factory. 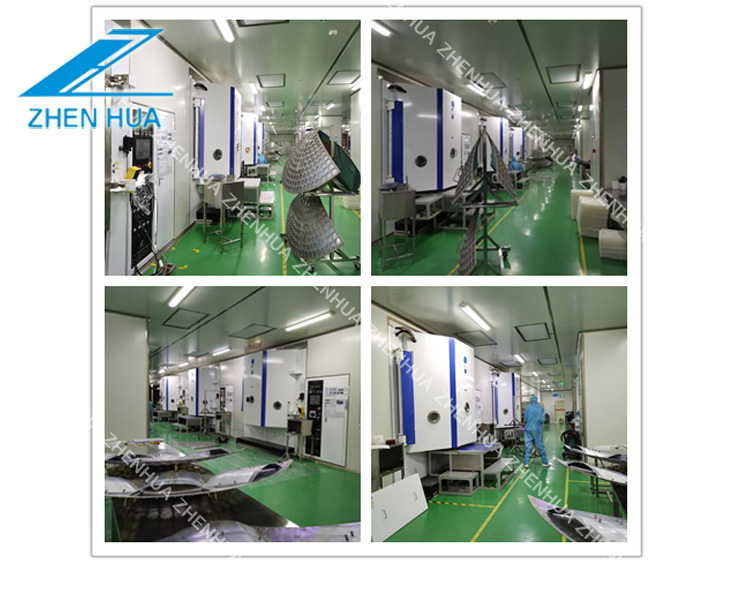 Assuming that the light is perpendicular to the surface, the ratio of the reflected light intensity to the incident light intensity (reflectivity) of the surface is only determined by the ratio of the refractive index of the adjacent media: the reflection of each surface of coronal glass with refractive index of 1.52 is about 4.2%, and that of flint glass with higher refractive index is more significant. This kind of surface reflection causes two serious consequences: the loss of light energy reduces the brightness of the image;

After multiple reflections or diffuses, some of the reflected light on the surface becomes stray light, and finally reaches the image plane to reduce the contrast of the image and the image quality. In particular, complex systems such as television and film camera lens contain many surfaces adjacent to the air.

There are a lot of optical instruments applied in the visible spectrum area, which occupy the majority of antireflection films in terms of their output. Antireflection processing is required in almost all optical devices.

A device that divides a beam of light into two parts is called a spectroscope. The working part of the spectroscope is generally a coated plane, which has a specific reflectivity and transmittance in a certain wavelength range. Usually the plane is inclined, so the incident light and the reflected light are separated. The predetermined reflectance and transmissivity of the spectroscope vary with its application.

There are different transmittance and reflectance ratio T / R for different spectroscopes, that is, the spectral ratio. The most commonly used is the neutral spectroscope, t / r = 50 / 50, which divides a beam of light into two beams with the same spectral composition. Because it has the same transmittance and reflectivity ratio to each wavelength in a certain wavelength region, the reflected light and the transmitted light have no color and are neutral.

In most cases, you want to cut off all light that is shorter or longer than a specific wavelength. The usual way is to combine the interference filter with the absorption filter. It can be used not only as a shortwave pass filter to cut off long wave, but also as a long wave pass filter to cut off short wave. As long as the wavelength of monitoring film thickness is changed, the cut-off position can be moved at will.

With the development of modern information optics, optoelectronic technology and photon technology, the requirements for long life, high reliability and high strength of optical thin film products are becoming higher and higher, so a series of new optical thin films and their preparation technologies are developed, and a comprehensive solution is provided to solve the problems faced by the industrialization of optical thin films. It includes high-intensity laser, diamond and diamond-like film, soft X-ray multilayer film, solar selective absorption film and optical communication credit film.